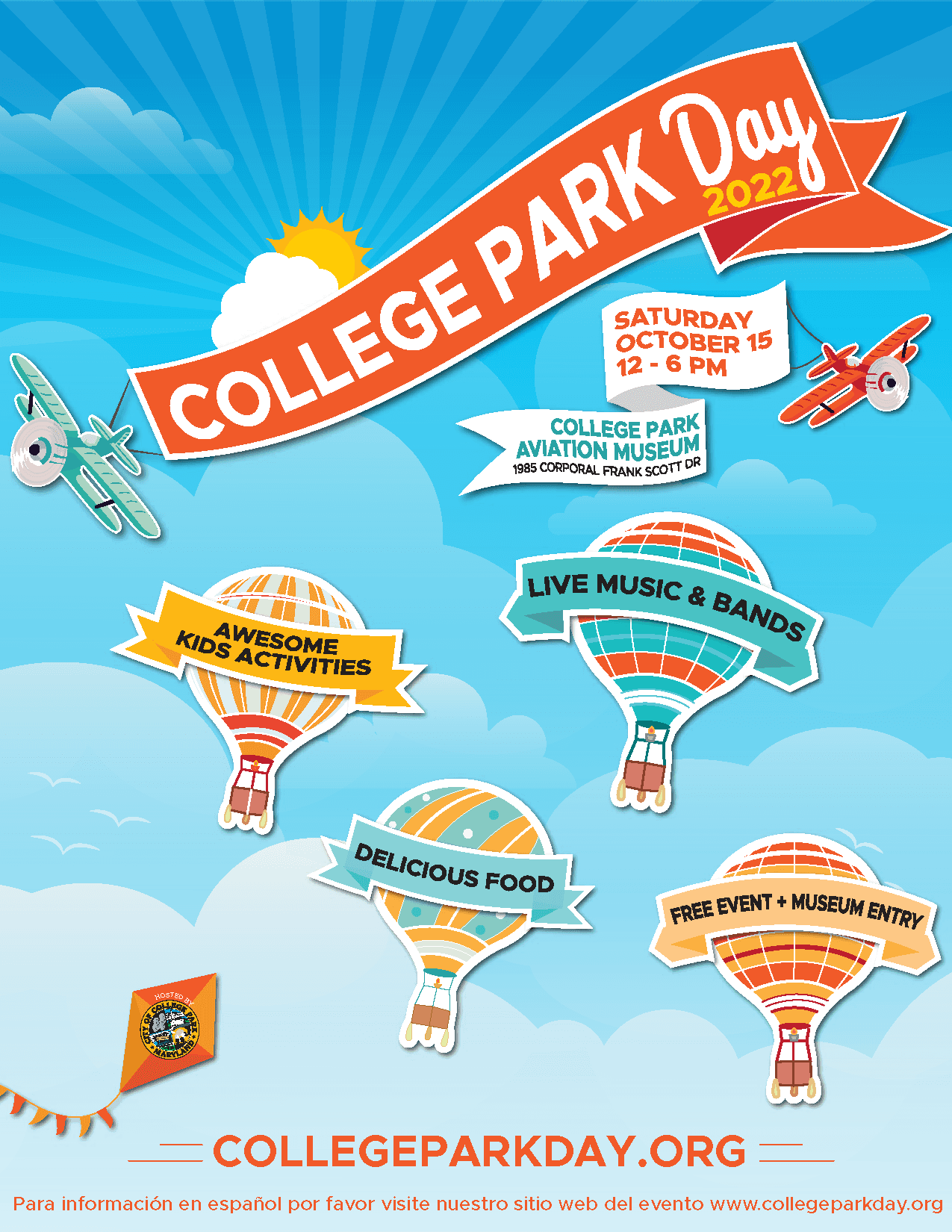 College Park Day is on Saturday, October 15, 2022, from 12:00 to 6:00 p.m. at the College Park Aviation Museum and Airport (1985 Corporal Frank Scott Drive)! This is the City of College Park’s signature event and features a wide array of activities, entertainment, and fun to celebrate the community. The event is open to the public and free to attend.

There are a few free parking areas available for College Park Day!

Limited free parking is available at the corner lot at Corporal Frank Scott Drive and Lehigh Road — 2 short blocks away!

Take the Metro Green Line and exit at the U of MD/College Park station and walk 4 short blocks to the festival.

From all points in the Washington D.C. area, make your way to Baltimore Avenue/US Route 1 towards College Park.

From the South:
Take Baltimore Avenue/US Route 1 to Campus Drive and make a right.  Follow the road to the event.  Please follow traffic directions from police who will be directing traffic.

From the North:
Take Baltimore Avenue/US Route 1 to Campus Drive and make a left.  Follow the road to the event.  Please follow traffic directions from police who will be directing traffic.

Bike racks will be on location in a sectioned-off area with an event volunteer in place to monitor.

East River Band is a 4-piece progressive rock outfit based in the DMV area. In just one years’ time, they have become a common fixture at venues across three states and seven cities. Along with covers of classic rock, country, and blues standards, they are known for their highly melodic songwriting style and psychedelic improvisational breaks. This winter, the band plans to release an EP along with continuing their ambitious touring schedule.

Playing all the hits from the decade of boogie and the dance floor at Studio 54. Groovalicious is a 70s Dance Band & Disco Revival.

Husband and wife singer-songwriters Rick and Audrey Engdahl have long delighted families and children in the DC area with their fun, clever, and lyrically beautiful songs, such as Caterpillar, KMC-1002, on albums such as Imagine That! and Sense of Wonder.

The Great Zucchini, Washington’s funniest and most magical PRESCHOOL & KINDERGARTEN entertainer, performs a colorful magic show where every child is a star and guaranteed to laugh!
For over 25 years, The Great Zucchini has been entertaining young children. He performs his hands-on, interactive magic shows for more than 700 groups a year.

In addition to appearing at hundreds of schools and thousands of birthday parties throughout Maryland, Virginia, and DC, The Great Zucchini has also entertained at the 9:30 Club, DC Improv, Arlington Cinema Drafthouse, Historic 6th and I Synagogue, ABC 7 “Let’s Talk Live,” numerous embassies, Jammin’ Java, Avalon Theatre, and Celebrate Fairfax.

Barry Louis Polisar is an author, songwriter, poet, and storyteller for children who also writes songs and books for adults. He performs his songs on two different Grammy Award-winning albums and sings his song All I Want is You in the opening credits of the Academy Award-winning movie Juno.

Barry’s songs are featured in television shows, feature films, and dozens of TV ads throughout the world. His books and poems have been translated into other languages and his songs have been recorded and performed by singers and musicians internationally. He has written songs for Sesame Street and The Weekly Reader and starred in a television show for children that won two Emmy awards.

Do you have what it takes to be College Park’s Top Pilot? How are your engineering skills? We are looking for the best of the best…or at least the plane that can go the farthest. Join us for the College Park Great Paper Airplane Competition! Come to the family stage at 3:45PM with your plane already built/folded (must use one of our College Park Day sheets of paper) and be ready to FLY! We’ll run two heats: 6– 7 years old and 8 to 11 years old. The longest flight wins! Come on Test Pilots, earn your wings!

Zig Zag from Funmakers. Laugh out loud entertainment and more.

Thank you for for your interest in volunteering at College Park Day on Saturday, October 15, 2022!

The following are the time slots and duties where volunteers are needed:

Please email events@collegeparkmd.gov and include “Volunteer” in the subject line.  Include your name, email address, phone number, if you need Student Service Learning Hours, and time slot listed above that best fits your schedule.