“The City is thrilled to receive this Sustainable Maryland award and to be recognized for all of our efforts in conservation, sustainability, and positive community impact,”  said Mayor Patrick L. Wojahn. “As a Sustainable Maryland Certified municipality, the City has introduced and expanded services that divert items from the landfill, began work to increase our tree canopy, and efforts to educate residents on water runoff to reduce pollutants in our waterways. Thank you to all who have helped us achieve this award.”

A total of 18 Maryland municipalities were honored at the awards ceremony. To achieve certification, municipalities are required to form a Green Team comprised of local residents, community leaders, municipal staff and officials; complete a variety of sustainability-related actions; and submit the appropriate documentation as evidence.   To achieve a Silver level, municipalities must score above 400 points; the City was certified at the Silver Level with 580 points.

For a detailed summary of the City of College Park’s sustainability actions and certification report, please click here. 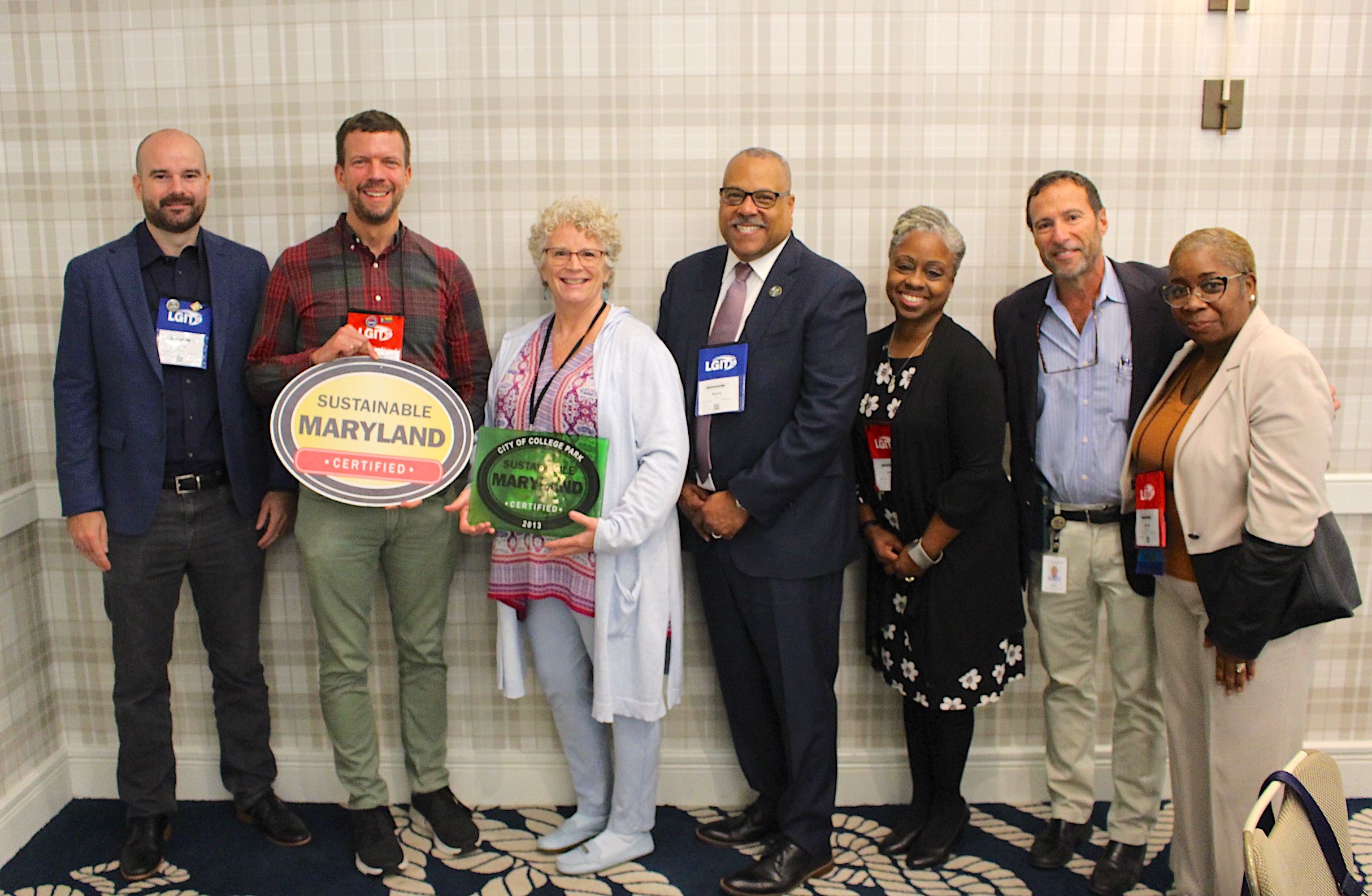 Storm Drain Murals
In the Fall of 2021, the Committee for a Better Environment partnered with the College Park Arts Exchange to bring environmental awareness about pollution, specifically what goes down the drain ends up in our waterways. The storm drain murals depict plants and animals that are part of the Anacostia Watershed. Look for more artwork in the near future.

TREES OF THE TROLLEY TRAIL

In the fall of 2021, the Committee for a Better Environment (CBE) rolled out a Tree Identification Program to show residents native trees along the Trolley Trail in College Park. Signs were installed and an online storyboard was created (and is still being updated) (https://storymaps.arcgis.com/stories/2bb4e8c7031b4770ab57609ca5d559de). The program will continue in 2022 with about 10 more trees being identified.

Articles from the Tree and Landscape Board

Which season is the best time to prune deciduous trees?  If you guessed winter, you would be right!  This is because damaged limbs and the presence of pests are more clearly visible during the winter after leaves have fallen off the tree.

During the dormant or winter season, a tree without leaves allows an arborist to inspect the tree canopy for limb damage, and make recommendations for pruning or removal.  The arborist will also inspect the structure of the tree and branches. Pruning may be recommended to increase airflow through the tree canopy to help prevent storm damage when leaves return on the tree.  Trees that sustain damage from storms are more likely to be subjected to insect damage and disease pressure.

But before you do any pruning or tree work, the first step is to contact a certified arborist who is licensed in the State of Maryland, to perform the tree work.

The Maryland Department of Natural Resources is the state agency that licenses companies that perform various types of tree maintenance.  You can find a list of tree companies licensed to perform tree maintenance in the State of Maryland using this link: https://dnrweb.dnr.state.md.us/forests/tree_expert_search.asp.  The listing indentifies companies that have ISA (International Society of Arboriculture) certified arborists on their staff.

Winter is also a good time to inspect trees for signs of disease presence or insect damage.

If the arborist identifies a pest presence, control measures  may be recommended  prior to leaf growth in the spring, or dormant pruning for certain species of trees, which are susceptible to insect vectored diseases. Insects that carry harmful tree diseases (i.e. Dutch Elm or Oak Wilt), are less active during cold winter weather, thereby enabling recommended pruning.  Dormant pruning will permit callous tissue to begin sealing the pruning cut before spring growth begins and insect pests become active.  Some tree species that are pruned during the warmer months of the year may become susceptible to invasion of diseases or insect damage due to increased pest activity.  This is because the sap on the freshly cut limbs and branches will attract insects such as beetles and emerald ash borers that are harmful to Oaks and Ash trees.  Trees in the rosacea family such as pears, apples, shadbush, and hawthorns should also be pruned during the dormant season to help reduce the spread of bacterial fire blight disease.

Plight of the Bradford Pear

Longtime residents of College Park will remember streets lined with blooming Bradford pear (Pyrus calleryana) trees, the one-time official tree of Prince Georges County. Currently, there are far fewer Bradford pear street trees in College Park and the official tree of Prince Georges County has changed to the native willow oak. Which brings us to the questions, why are Bradford pears no longer a preferred street tree and why was there a change in designation of the official County tree?

A bit of background first. Fruiting pear trees were introduced to North America by the early European colonists in the 1600’s. During the 1950’s, fire blight, a bacterial disease, began impacting fruiting pear trees on the West Coast of the United States. Scientists at the US Department of Agriculture in Oregon and at Glenn Dale, Maryland worked to develop a fire blight resistant fruiting pear tree by grafting Asian varieties of pear tree root stock onto fruiting varieties.

Researchers in Glenn Dale observed the durability of the Bradford pear and thought it would make a suitable street tree. They tested the tree along the bare streets of University Park, Maryland. The tree performed well and the push was on to introduce the Bradford pear to the nursery trade in the 1960’s. This tree species was also popular because it started blooming with an abundance of white flowers towards the end of March, which signaled that spring had arrived in Maryland. The shiny dark green leaves were attractive during the summer and changed to a pleasing burgundy fall color late in the season. These were some of the reasons why Prince Georges County adopted the Bradford pear as its official tree.

The original Bradford pear trees were self-sterile (unable to receive pollen from the same cultivar), but the new cultivar trees were able to send out root shoots whose flowers were cross pollinated by other varieties of pear trees, producing viable seeds. The fruit from these Bradford pears was then eaten by birds, and the seeds were dispersed by the birds resulting in Bradford pear trees growing along roadsides, in hedgerows, in woodlands and in fields throughout the United States. The Bradford pear is now considered an invasive species by the United States Department of Agriculture and the State of Maryland. The states of Pennsylvania, Ohio, and South Carolina have passed laws banning the sales of this tree species.

The Bradford pear has become an unpopular tree to plant due to several other reasons.  The flowers, though beautiful, have an unpleasant odor. Bradford trees grow quickly and have a large crown with poor branch attachment. The roots of the Bradford pear are shallow making the tree susceptible to failure during high winds. The structural deficiencies of the tree species become apparent after about twenty years of age when the trees begin losing branches and self-destructing during storms due to their tight branching habit. These undesirable attributes have contributed to the recommended and systematical removal of Bradford pear trees from roadsides and city parks in many jurisdictions throughout the Eastern United States.  Homeowners should consider replacing Bradford pear trees on their property before they reach an age when they begin to deteriorate.

Introduced Bradford pear trees can be replaced with tree species native to College Park that perform well as urban street trees. These native trees will help support pollinator species of birds, insects and mammals that are native to Maryland. Some of these trees are Sweetbay Magnolia (Magnolia virginiana), Fringe tree (Chionanthus virginicus), Eastern redbud (Cercis canadensis), Flowering dogwood (Cornus florida) and Serviceberry (Amelanchier canadensis). These are all flowering trees that bloom in the spring, however some flower earlier than others. A couple of larger trees that can be planted as replacement trees include the Tuliptree (Liriodendron tulipifera) and Southern Magnolia (Magnolia grandiflora). The Tuliptree is frequently visited by hummingbirds when its yellow flowers are in bloom.

Have questions about which Bradford pear trees in the City of College Park will be removed in the future and what replacement trees will be planted? Email the City Horticulturist at horticulturist@collegeparkmd.gov.  Before planting any tree, please contact Miss Utility at 811 or via https://www.missutility.net/homeowner to request the underground utilities be marked to avoid future conflicts.

Maintaining and planting trees provide numerous environmental and health benefits for the various organisms living and visiting in our area.  Important benefits that urban trees provide include:

Increased Business Activity: Trees attract businesses and tourists. People may linger and shop longer at businesses that are surrounded by trees which in turn, increases business and encourages social activity.

Support Wildlife: Trees provide food, homes, and shelter for many native and migratory animals. They support and protect wildlife, which benefits all of us.